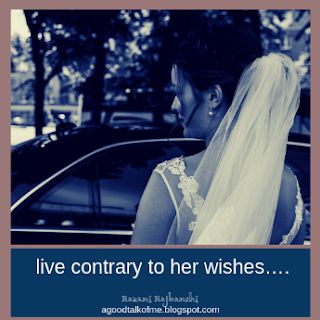 live contrary to her wishes….
Society is also one of the things that people need.  In order to live in the society, we must follow many rules and regulations. In the same law, marriage also takes place. In some cases, even though we are capable and willing to live alone, we are obliged to marry for society.
In our society, marriage is considered as important and there is a perception that life without marriage is incomplete. In this sense, marriage is a form of society. Marriage is the pressure, especially for women. In the society, it is considered a failure of the parents, who cannot complete their responsibilities to send their daughter away from home. If for some reason a daughter’s marriage is delayed, the parents adopt a number of methods and measures which, with the help of this, the idea that marriage will be faster.
A woman’s life without men
That woman is considered to be completely unsuccessful, which is the shortage of men in a woman’s life.Suppose a woman was born for a part of the blind race to get a husband.
Women are obliged to surrender their lives before their physical condition deteriorates, before menstruation breaks, the time to become a mother and even become “The women” It doesn’t matter if the man is capable of being a good life partner, whether he loves or not, as much as a woman needs to be married.
Our society drives women down in every way. Society always seeks to make women weaker than men. There are many ways to protect the beauty of women and their health, it makes you think that there is a big problem when it comes to the expiry date of femininity and puberty. The society thinks that without a husband the life of a woman is meaningless and incomplete. Most women whose husbands stop loving at some point in the marriage, are always in conflict between the two, the child is also harassed. the mother- is not well behaved. Yes, they do suggest marriage.
Other perceptions of single life
Often, men’s view single women as sympathetic. They do not have illicit relations with them when they get the chance. It is wrong to talk about the great things of the relationship and the fact that marriage gives honor and dignity to society, even when you are not in a relationship.
Generally, women who are unmarried are viewed by people with questioning eyes. They are of the opinion that even at this age they have not been able to afford a house. Even if you are not married, by working you can spend your life alone and happily ever after. In your life, happiness and freedom are low and responsibilities are many. You can’t live the way you want. You can’t spend a lot of time with friends and relatives.
Many women do not dare to say that; they do not want to get married in front of their parents. Parents take the responsibility of their daughter’s marriage as a only responsibility, and the daughters also bow down and obey their parents. They are obliged to obey their parents despite their desire to read and make a career.
Despite the not desire to marry a woman, social pressure causes the marriage into a bond. In such a situation, women sometimes marry ineligible men and live a life of misery and pain.
So marriage is not just a relationship between a woman and a man. Marriage involves two families, different responsibilities. The wife should obey her husband in everything, ask her mother-in-law and her husband to buy what she likes and needs. It is difficult for a woman to make time for herself because of the tasks like completing the family and accompanying her husband.
Not everyone’s happiness is the same. Happiness for each person can vary. Some find happiness in their education and career rather than marriage. If the marriage cannot make her happy, then pressuring her to marry is wrong. If she is happy and happy in her single life, it is also wrong to try to make unnecessary bonds.
It is also wrong to interfere with her life if she wants to live her own life. It is also wrong for her to show fear of society and to live contrary to her wishes.Instead of making all these mistakes, she should be encouraged to prove herself strong. If you do so, she will be very happy and happy in her life.

50+ Love Quotes to express your love in different ways.

How to Recover from a Breakup?

Frustration tends to be more for women than men.

How comfortable is his/her life with you?